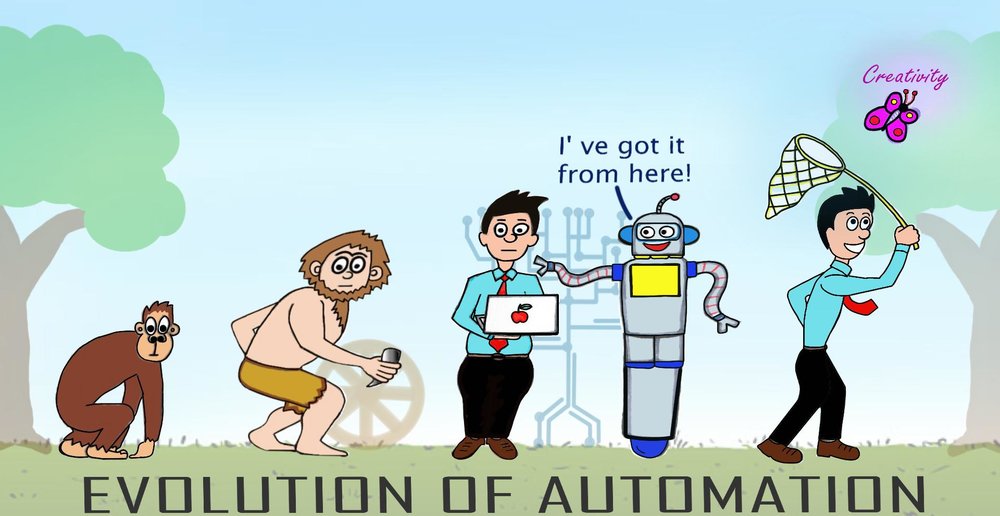 Getting things done and getting them done with an ease. Automation helps us achieve exactly that. Today we have a woven fabric of automation around and its impact is already upon us. What is not automated around us today? The impact of automation and technology on our lives is increasing on a daily basis. You can ask Siri to play your favorite song, you can ask the Google Assistant to book you a table at a restaurant, you can have a driver-less Uber waiting for you at your doorstep at the push of a button, you can get pizzas delivered by drones, you can build 3D printed houses, and the list goes on. Could we have imagined all this happening in the real world, outside of the sci-movies, even 10 years back? With this epiphany striking us, a thought quickly comes to the mind – when did this automation thing really start?

Millions of years ago, the ancient man made use of a variety of weapons made up of stones to kill their prey. It was an easier and efficient way of getting food, reducing the risk to their lives. The invention of the wheel at around 4000 BC was another major highlight, without which we cannot imagine the world today. It paved the way for easier and efficient way of transportation. In the first century AD, Heron of Alexandria, a Greek mathematician, invented the first known automatic door which could open the gates to the city using a series of ropes and pulleys. Fast forward to the end of 18th century, we saw the dawn of industrial revolution. The use of water and steam powered mechanical manufacturing facilities became the norm. The start of 20th century saw the introduction of electrically powered mass production lines for bulk manufacturing, also referred to as the industrial revolution 2.0. The use of electronics and IT since the 1970s to further automate manufacturing was termed as the industrial revolution 3.0. Whereas today, we are on the verge of industrial revolution 4.0, which bases itself on the use of cyber-physical systems and AI. Also, technologies like Blockchain, Integrated AI (Generic AI) and Intelligent Chatbots which are just around the corner, have the capacity to for elevate automation tech to a whole new level.

And by no means this pace is going to slow down. Today, many of the world’s leading organizations are already experiencing and in turn adapting to the disruption brought about by this modern automation of today. Robotic Process Automation (RPA) is one such change which is being adopted into the organizations turning towards automation. Moreover, people have started envisaging the automation of tomorrow, to be brought about by full-blown AI tech. Applications of natural language processing, big data and machine learning have already spread across various fields like healthcare, customer service, banking, etc. Integrating NLP and ML with RPA has opened newer vistas which come under the purview of Intelligent Automation. Such adaptability, together with innovation, is going to be the key factor for us to be able to successfully ride on this wave of change.

The BIG Question – Will Intelligent Automation have negative impact on jobs?

YES and NO. Yes, as that is what happened with the advent of previous industrial revolutions. Many of the blue collar jobs have already been subject to a decline due to previous automations in various industries. The current wave of RPA and Intelligent Automation will also take down most of the white collar jobs involving quotidian tasks and repetitive work. And NO, because this will make the world follow the new technology and give up outdated skills, in turn giving rise to newer jobs. Man’s relationship with learning has been changing in the past and it will change in the future as well. While automating the mundane tasks, we will have more spare time to focus on finding creative solutions to the various problems we are trying to solve.

BOT out of the BOD?

This wave of Intelligent Automation may prevent us humans from becoming machines and be humans again. We may eventually succeed in getting the ‘Bot out of the Bod’. Automation today, on the back of RPA and automation tomorrow, with AI at its full potential, will certainly revolutionize businesses as a whole and the possibilities of such a future seem limitless!